skip to main | skip to sidebar

I can't speak for anyone else, but I, for one, am certainly enjoying the weather. That is to say, I'm enjoying it right now. About two hours ago, when it was raining, I didn't like that. But I do like the snow. It seems to me that February 6 is a wonderful day for snow, maybe a good nor'easter; heck, I could even go for a little bit of freezing rain once in a while. But flooding...? No, thanks very much, I shall pass on that little bit of fun.

For all those of you out there who prefer to believe the Bible is a fairy tale, and that the parts about the 7 years of tribulation are a bunch of hooey, does all the weird weather make you squirm just a little bit? The rivers around here haven't peaked yet, but predictions are that they will peak two feet above where they were three weeks ago. That would make this our third 100-year flood since 2003! I'm not so great at math--I was originally accepted at Purdue as an engineering major, but changed my major before school even started after seeing the four-year plan of math and science--but even so, I am certain that February 2008 minus January 2008 minus July 2003 does not equal 100 years, and certainly not 300 years as it should. Back to the Purdue thing for just a second; I didn't like the four-year math/science route, so instead I opted for the 6-1/2 year business/construction/education route. Probably not such a great choice, particularly now that I'm in the crop insurance business! 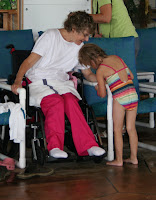 This is a gratuitous picture that has nothing to do with anything, but I thought I'd throw it in there for my own edification. This is a shot of Grandma Martha and Makayla when we all met at the Holidome in Indy back in early August. Even as I write this, it's hard to believe that it's been over two months since Martha died. You know, before she got sick, I knew virtually nothing about Amyotrophic Lateral Sclerosis. I did not know anyone who had the disease. The only thing I knew about it was that it was more commonly known as Lou Gehrig's disease, and it was ultimately fatal. Now, we've lost Martha, we have heard of five or six other people in Pulaski county with ALS, and I know of another man who was just diagnosed with the disease yesterday, also in Pulaski county. That's a little bizarre. It certainly makes you think it might have some environmental influences or causes. Anyway, not to put a macabre spin on this little posting, but it popped into my head, and since I'm doing the typing, it made it to the Internet for perpituity.

I wonder if green spiders spin stronger webs than black spiders. Green M&Ms have always been my favorite for the same reason they've always been your's. To me the brown ones look too much like rabbit turds. A guy brought some dark chocolate peanut M&Ms to the office today, and I thought, "These are the perfect food." We all know that peanuts provide excellent protein and fiber, and I just read in Reader's Digest that dark chocolate lowers blood pressure and cholesterol. I thought about eating the entire bag, but that seemed somewhat selfish.

Ever wish you could work with clay? Just take a big sloppy hunk of wet clay out of a burlap bag, plop it down on a turntable, stick your hands in there, spin the doohickie with your feet, and begin modeling to your little heart's content...me too. I bet God had a great time when he was creating the world. Kind of like the ultimate modeling clay.

You know, I guess few of really know anything about ALS until it hits close to home. I know I did not know anything until my diagnosis four years ago. If you make it past six months, at least I got over the abject fear of dying tomorrow and learning to live with the disease and it terrible progression.

It is up to us who have the disease and who have lost loved ones to let the world know about ALS and that there is no known cause and, regrettably, no cure, and not real hope for one on the horizon.

Heck, after four years of struggling to get legislation to establish a national registry of those with ALS, one lousy Senator with high political aspirations blocked the legislation on its final step for approval.

Thanks for putting down your thoughts for posterity.

When you pay attention, it sure doesn't seem so rare. Thanks for remembering Martha and pointing out what's going on in Pulaski County.

Mike,
Very glad to see a new entry in the McKay Chronicles! Thanks for taking time to "be back."
Keep up the good work of communicating about Martha's ALS - we must not forget! I think many of us learned to rely on God, to be faithful in praying and trusting Him, and to look - to always look for something good.
I can see Drew in his new realm of wrestling. He is willing to face physical challenges and to work hard to achieve good things. I pray you and Val will continue with the "good parenting" you are doing. And - never lose your crazy, entertaining humor!

Machoid
Medaryville, Indiana, United States
An alien on this earth, saved by the blood of Christ and the grace of God; happily married for 15 years; two sons and two daughters; into reading, kayaking, baseball, woodworking, and cheeseburgers with mushrooms.